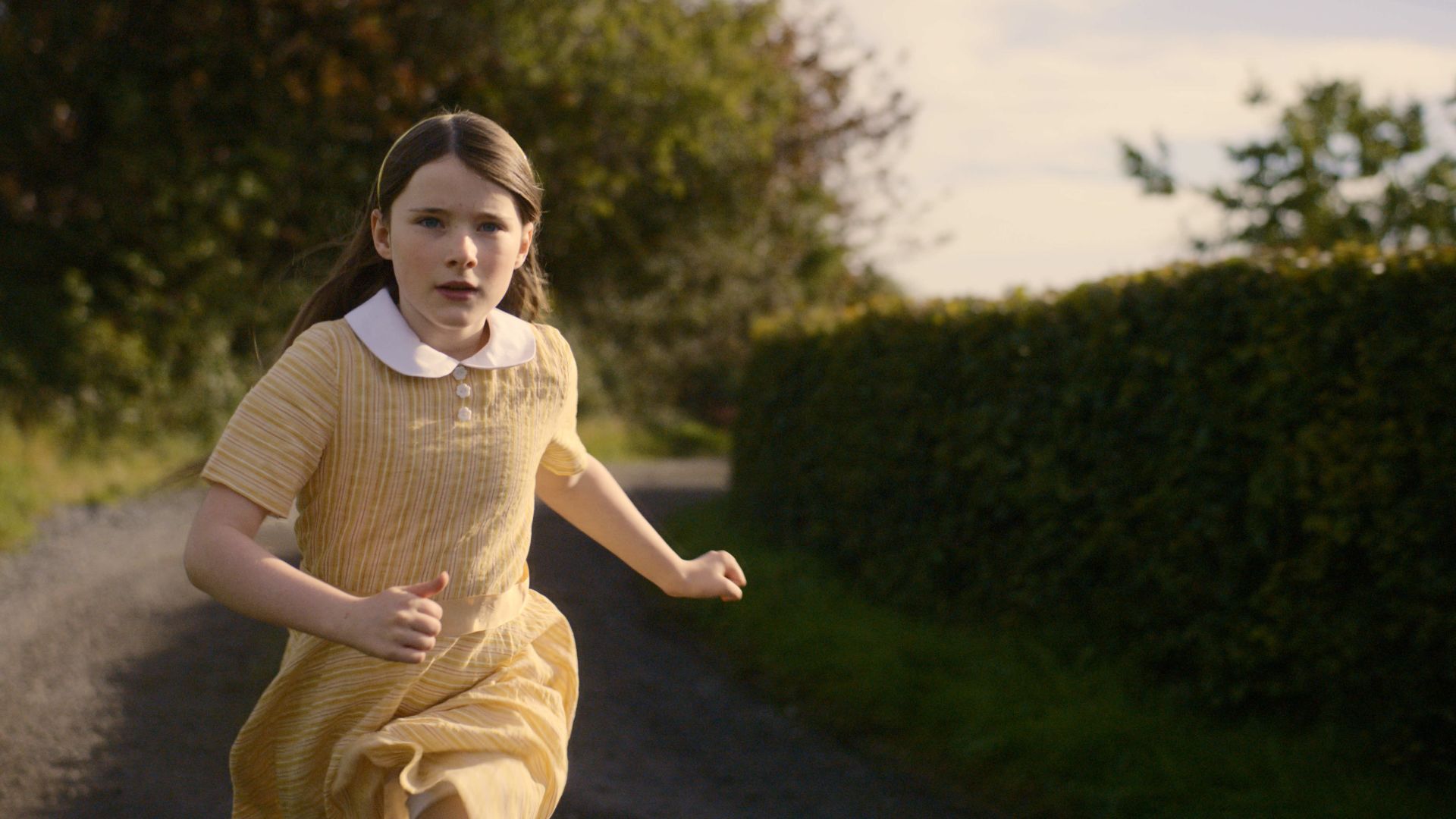 An Cailín Ciúin has grossed over €1million at the box-office, a remarkable feat for an Irish Language film after 22 weeks in cinemas in Ireland and the UK. Since it’s release last May, the film has been a major hit at international film festivals, won a slew of awards and become a critic’s darling garnering 5-star reviews across the board. AN CAILÍN CIÚIN is also Ireland’s entry for the Oscars® Best International Feature Film category at the upcoming 95th annual Academy Awards.

Based on Irish author, Claire Keegan’s acclaimed story, Foster, AN CAILÍN CIÚIN is an intricate, deeply felt coming-of-age drama that delves into the meaning of family through the eyes of a neglected young girl. Set in rural Ireland in 1981, the film follows Cáit (Catherine Clinch) as she is sent from her overcrowded, dysfunctional household to live with distant relatives for the summer. She is welcomed with open arms by Eibhlín (Carrie Crowley), but her husband (Andrew Bennett) keeps Cáit at arm’s length. Slowly, however, a warmth grows within this makeshift family and Cáit begins to blossom in their care. But in this house where there are meant to be no secrets, she discovers one painful truth. An Cailín Ciúin was produced by Cleona Ní Chrualaoi of Inscéal, the production company she established with Colm Bairéad in 2012. It was made as part of the Cine4 funding scheme for Irish-language films in partnership with Screen Ireland, TG4, and the Broadcasting Authority of Ireland (BAI). The film is also in receipt of the Irish Government’s Section 481 tax incentive.

Writer/Director, Colm Bairéad and Producer, Cleona Ní Chrualaoi of Inscéal said “We are truly humbled by the manner in which audiences in Ireland and the UK have embraced our film. To every single person who bought a ticket for An Cailín Ciúin (The Quiet Girl) and who championed the film since its release in May, we say thank you from the bottom of our hearts. Huge thanks and congratulations to our fantastic Irish and UK distributors, Break Out Pictures and Curzon, who continue to work incredibly hard on the release. We are enormously grateful to all the cinemas who have allowed the film the time and space to grow and to Access Cinema for its extraordinary work in making the film available to local audiences. We owe an enormous debt of gratitude also to Claire Keegan for allowing us to adapt her work to the screen. The film’s success is testament to the truly universal work she created in “Foster”. And last, but not least, we would like to express our sincere appreciation to TG4, Screen Ireland and the BAI, as funders of the Cine4 scheme, for believing in us as filmmakers and supporting us during this extraordinary journey. It has been a life-changing experience.”

Alan Esslemont, Director General of TG4 said: “TG4 congratulates everyone at Inscéal and all their creative and distribution partners on this superb milestone for ‘An Cailín Ciúin’ at the Irish and UK box-office. Most of all we thank Cleona and Colm for creating this beautiful film about speech, silence and love which is already being seen worldwide as one of the classics of Irish cinema. It is also a wonderful affirmation of the quality of creative talent working through the medium of the Irish language and a strong endorsement of the TG4, Screen Ireland and BAI partnership which launched the Cine4 scheme and regularly brings cinema-goers into a new world – the world of Irish language cinema.”

Commenting on this remarkable achievement, Désirée Finnegan, Chief Executive Fís Eireann Screen Ireland said “All of us at Screen Ireland are deeply proud to have supported An Cailín Ciúin. Seeing the impact the film has had on audiences from every generation has been truly moving, and we believe a watershed moment for Irish-language cinema, which has been redefined by the incredible output from the Cine4 scheme in recent years. In the middle of an intensely difficult time for cinemas and the cinema-going experience, an Irish-language film broke domestic box office records and told a beautiful story about childhood, connection and the power of care. Our congratulations to director Colm Bairéad, producer Cleona Ní Chrualaoi, actress Catherine Clinch and the entire team behind bringing An Cailín Ciúin to life.”

It’s a historical first for an Irish language film to reach such incredible heights and speaking on its continued success Nell Roddy and Robert McCann Finn, joint MD’s of Break Out Pictures commented: “It’s a fantastic result and we’re thrilled that audiences in Ireland and the UK have embraced the film as much as we did. It’s a phenomenal achievement for any film to cross the €1 million mark, but especially now given the increasingly difficult market. Many thanks to everyone for coming out to see this special film and to all the cinemas for their unwavering support. Huge congratulations to Colm, Cleona and all the ‘An Cailín Ciúin team for reaching this significant milestone.”

Louisa Dent, MD of Curzon added: “Passing €1,000,000 at the Irish and UK box office is a remarkable achievement. It has been wonderful to see An Cailín Ciúin (The Quiet Girl) connecting with audiences in such a deeply emotional way. Huge congratulations again to Colm Bairéad and the whole filmmaking team.”

An Cailín Ciúin is still on release in select cinemas nationwide.