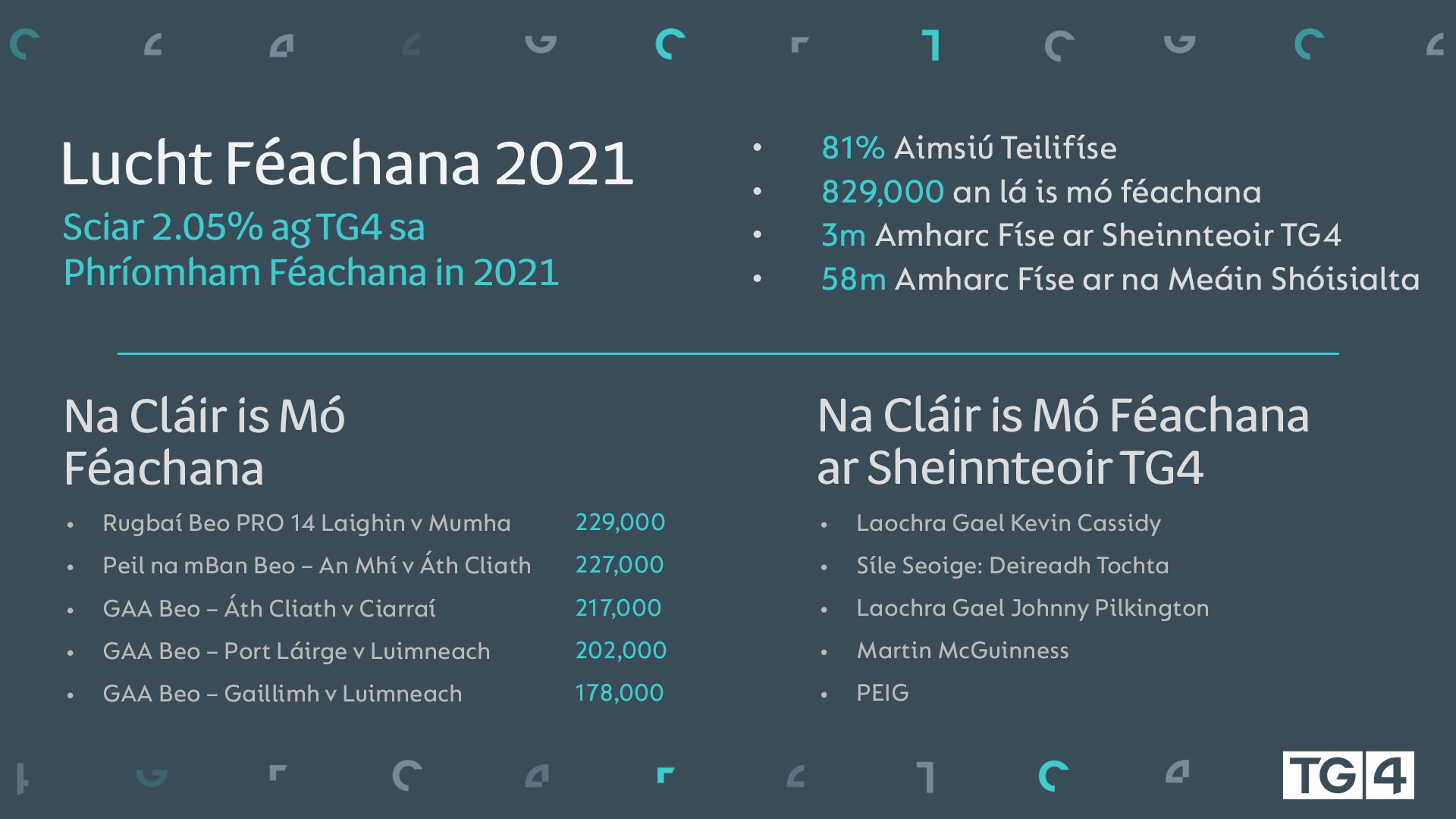 May was the best month for TG4 in 2021 in terms of audience share. The station had an all-day share of 2.74% during the month.The highest daily reach of 829,000 was on May 23rd during the Allianz League triple header.

Sport dominated the viewing figures for 2021. The most watched programme of the year was Rugbaí Beo‘s Pro-14 Final between Leinster and Munster on Saturday 27th March. The game had an audience reach of 545,000 and an average audience of 229,000 viewers and 21.5% share of the viewing audience at the time. The live final of the TG4 LGFA Football final Peil na mBan Beo between Meath and Dublin on September 5th was the second most watched programme last year. It had an average audience of 227,000 and a share of 29.9%.

A special programme of music, song, dance and poems on the occasion of President Michael D. Higgins’s 80th birthday, recognising his enormous contribution to the Arts and featuring some of Ireland’s finest performers Ómós Michael D @ 80 was watched by 118,000 people and had a share of 9.1% of the viewing audience.

There were over 3m views last year to the TG4 Player between live viewing and VoD, an increase of 15% on what was a big year for the Player in 2020. Total time viewed on VoD went up 33% in 2021 compared to 2020. The most watched streamed programme on the TG4 player was the Laochra Gael documentary which featured Donegal footballer Kevin Cassidy. Born in Glasgow, he moved to his mother’s homeplace of Donegal in his youth. With a new language and sport to learn, Kevin embraced both eagerly. He was a star for Gaoth Dobhair and soon became a cornerstone of the county team. Síle Seoige’s documentary about miscarriage, Síle Seoige: Deireadh Tochta, which set out to put an end to the culture of silence and stigma around the terrible loss that is experienced by so many was the second most streamed documentary on the TG4 Player.

Social media views grew by 20 million video views in 2021, with a total of 58 million views for the year.

Alan Esslemont, Director General of TG4 said, “I would like to congratulate the team in TG4 and the programme producers in the Independent sector on this achievement. Despite continued Covid-19 challenges, growing the prime-time share to over 2% for the first time since 2013 in a time of increased choice for audiences is a considerable feat. We are proud of our programme content and schedule that continues to attract strong audiences. It is clear that TG4 represents public value for our audience and their continued appreciation of our content as a channel and as a brand is greatly appreciated. We are grateful to Minister Martin and her department for their continued support and belief in TG4. We look forward to 2022 with great enthusiasm.”