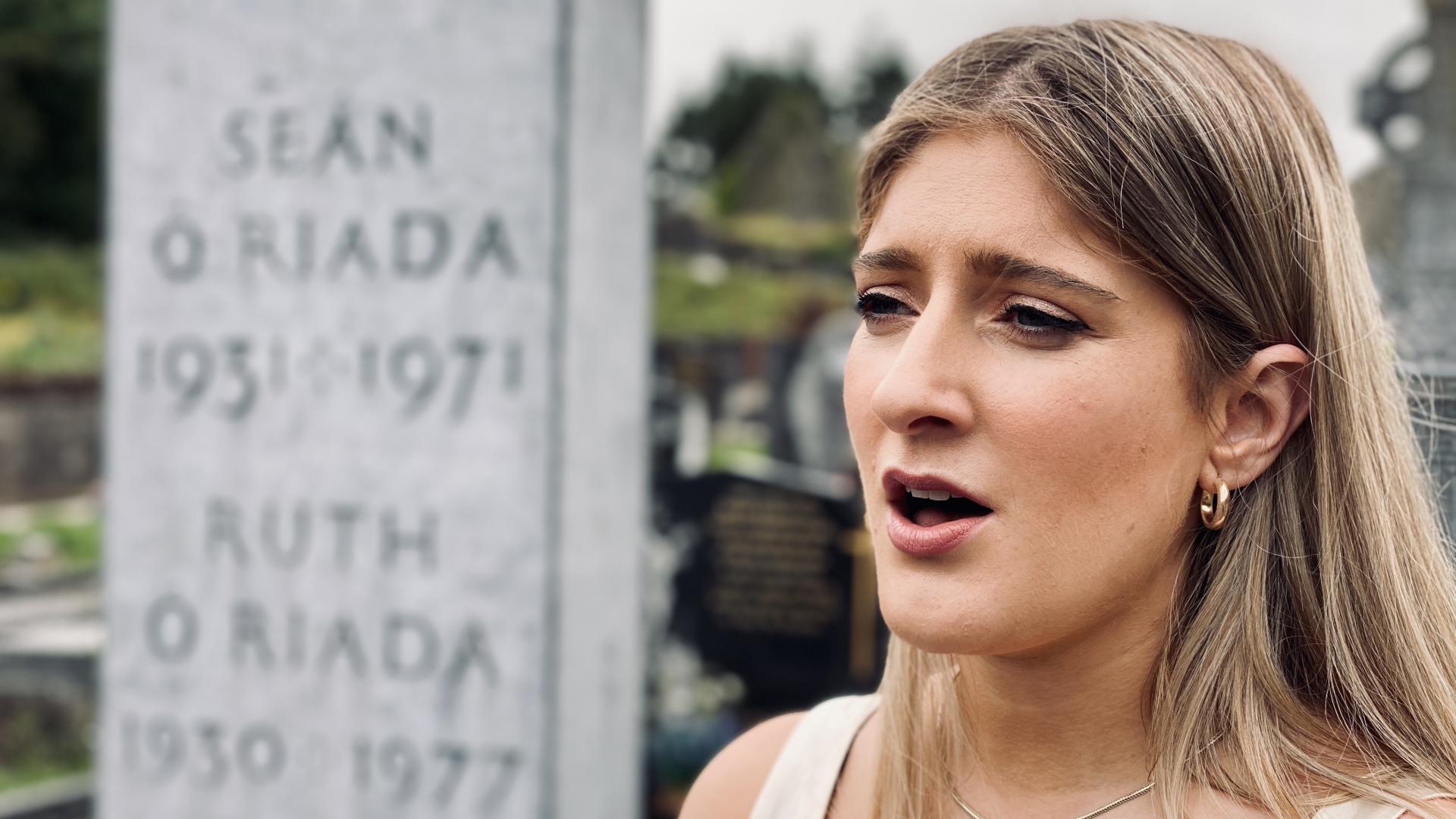 TG4 announces its Christmas tv highlights. New documentaries and new music programmes form the schedule’s staples this year, with highlights including a new documentary about actor Peter O’Toole on Christmas Day, Peter O’Toole Réalta & Rógaire, a new documentary fronted by the granddaughter of Seán Ó Riada, Doireann Ní Ghlacáin who is looking to find out more about the iconic musician who passed away 50 years ago in Seán Ó Riada – Mo Sheanathair. There are tributes to sportsmen and musicians who have passed away recently, with a documentary about Cork’s Ladies Football Manager Éamonn Ryan who passed away in 2020 in Éamonn Ryan – An Máistir, and a celebration of one of Ireland’s most loved and respected musicians Ceiliúradh Joe Burke to remember east Galway’s Joe Burke who passed away in February 2021. Other highlights in the schedule this Christmas include music documentary about The Saw Doctors originally broadcast in 1991 and a Hey Day – The Mic Christopher Story about Dublin musician Mic Christopher who passed away 20 years ago. On New Year’s Eve, Dáithí Ó Sé and Orla Ní Fhinneadha will countdown to the new year from the Ráth Chairn Gaeltacht in Co. Meath on Fáilte 2022.

Peter O’Toole was known throughout the world as Lawrence of Arabia, as a hell-raising actor and as an Irishman. His distinguished career saw him conquer the stage and screen as one of our greatest movie stars. Now, for the first time, his amazing life and career is explored by those who knew him best – his friends, family and fans. Featuring exclusive photographs and interviews with his daughter Kate and co-stars Brian Blessed, Twiggy and Mary Coughlan, an definitive account of this extraordinary man.

50 years after his death in 1971, Sean Ó Riada’s granddaughter Doireann Ní Ghlacáin resolves to find out more about this divisive and iconic figure. By charting her grandfather’s life and times, we uncover the true Ó Riada, in a moving tribute to this giant of Irish cultural life. With performances from Iarla Ó Lionaird, Barry Douglas, Nell Ní Chróinín, Cór Chúil Aodha & Peadar Ó Riada and interviews with contemporaries and family. A seminal feature length documentary giving an intimate portrayal of Ó Riada like never before. Produced by Táin Media with Executive Producer Jim Sheridan.

Clann Johnny Jimmy Pheaitín are a well known family of mariners, a tradition handed down from both mother and father to Pádraig, Jimmy and Seáinín. Even though An Mhaighdean Mhara has been anchored for much of this season, the lads are kept busy sprucing up their Hooker and calling into their relatives who are building new boats. In this programme we meet the most capable and humble family of sailors in Conamara.

Éamonn Ryan is best known as the manager of the Cork Ladies Football team that won 10 All-Ireland Championships. Before that famous achievement he led an extraordinary life. He played for Cork in the All-Ireland Final in the sixties. But it was as a manager that his gifts blossomed. It became his trademark to revive the fortunes of teams in the doldrums. Every team he was with won championships. He inspired everyone who played under him, but he was humble about his own success. Éamonn Ryan’s life tells of the power of an exceptional mentor and teacher.

The world couldn’t keep its eyes off Nancy Kerrigan and Tonya Harding at the 1994 Winter Games. Just weeks before the Olympics in 1994 at the U.S. Figure Skating Championships, Kerrigan was injured by an unknown assailant. Harding’s ex-husband had plotted the attack with his misfit friends to eliminate Kerrigan from the competition. Now more than two decades later. The Price of Gold takes a fresh look at the scandal that elevated the popularity of professional figure skating and has Harding still facing questions over what she knew when she knew it.

Aretha Franklin: A critically acclaimed must-see concert documentary recording a seminal performance in Aretha Franklin’s career in 1972. Shot 47 years ago by Sydney Pollack but only constructed within the last decade. The audio recording went on to become the biggest selling live gospel concert of all time. The event took place after Franklin had scored numerous chart hits and was encouraged to return to her roots by Jerry Wexler at Atlantic Records and record a live concert celebrating her gospel beginnings with a local Baptist choir and the Reverend James Cleveland – a huge inspiration in her early musical career.

This heartfelt story charts singer-songwriter Mic Christopher’s humble beginnings busking on the streets of Dublin, his rise to rock star, the near fatal accident that nearly left him millimetres from death, through to his final year where he lead an entire generation of Irish musicians onto fame, success and new artistic highs. Told through the eyes of those whose lives he touched including Glen Hansard, writer/actor Sharon Horgan, Mike Scott of The Waterboys, Bronagh Gallagher, Josh Ritter, Lisa Hannigan, Rónán Ó Snodaigh and more. A touching and inspiring story of extraordinary music and friendship.

A special gathering of musicians, friends and family to celebrate one of Ireland’s most loved and respected musicians, east Galway’s Joe Burke who passed away in February 2021. Much loved and renowned for his wit and humour as well as his mastery of the box Joe’s influence on generations of Irish musicians was enormous. Tonight fellow musicians share music and memories in his honour. Featuring Ann Conroy Burke, Mary Conroy, Frankie Gavin, Brian McGrath, Eileen O’Brien, Máire Ní Chathasaigh, Liz & Yvonne Keane, Jackie Daly, Dermot Byrne and Conchubhar Ó Luasa.

The Saw Doctors were the most popular band in Ireland in 1991 following the huge success of their first two singles ‘N17’ & ‘I Useta Lover’ which spent a record nine weeks at No.1 in the Irish Charts. The Galway band’s debut album ‘If This Is Rock And Roll, I Want My Old Job Back’ went straight to No. 1 on its release in May ’91 and the album was again Top of the Charts in Ireland in August ’91. ‘Sing A Powerful Song’, is a documentary about the bands meteoric rise to fame with live footage of the band playing all their hit songs.

Philomena Begley’s big celebration of sixty years on the road! Daniel O’Donnell invites Philomena and her friends to the Opry stage to celebrate her amazing musical journey. Friends such as Mick Flavin, Sandy Kelly, Louise Morrissey, Mike Denver, Claudia Buckley, Aidan Quinn, Olivia Douglas and many more make this a night to remember.

The 24th annual Gradam Ceoil awards from Whitla Hall in Belfast. Among the performances on the night will be Niall Hanna with Rachel McGarrity, Ciarán Hanna and Enda Rafferty and Sorcha Costello with Jakob Vester, Pádraig Costello, Andrew and Mary MacNamara. Outstanding Contribution award recipients Glengormley School of Traditional Music will perform on the night under Conor Caldwell.
The gala event will also celebrate Seán Ó Sé and Steve Cooney along with Gradam Ceoil TG4 2021 winner Angelina Carberry.

Shot on location at the stunning Pearse Lyons Distillery, in the heart of the Liberties, We Banjo 3 come together for an exclusive live concert featuring their signature acoustic sound. This virtuosic and energy-filled show confirms why the Galway quartet are hugely popular on both sides of the Atlantic. With multiple Billboard #1 albums to their name, and an RTÉ Folk Album of the Year award, We Banjo 3 promise a night of unforgettable music and song.

Get To Know Us: