Samhlú is a new cultural partnership between TG4 and the Department of Tourism, Culture, Arts, Gaeltacht, Sport and Media’s Creative Ireland Programme. Samhlú was launched in December 2020 to celebrate the artistic endeavours and creativity that have endured throughout Ireland despite a very challenging year in 2020.

Samhlú 2020 a spectacular arts showcase aired in December as a 90-minute journey of music, theatre and dance fronted by Tommy Tiernan.

Samhlú Croí Cruthaitheach a season of twelve commissioned abstract short-films featuring artists and creatives is the second phase of the cultural project and will be released on the TG4 player www.tg4.ie/Samhlú from January 10th. 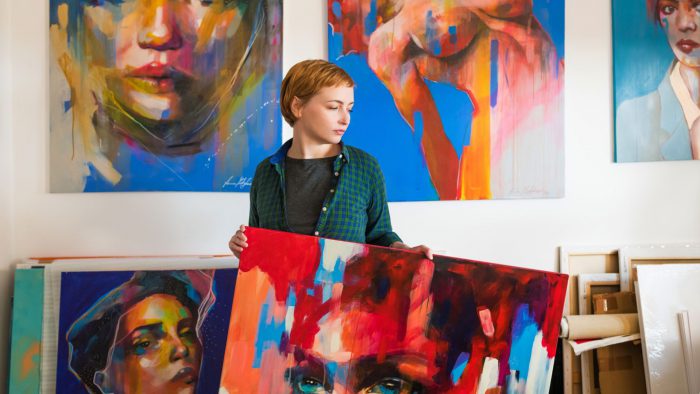 The short films are a visual and audio experience depicting the artistic process of some of Ireland’s hidden creatives. These are our unique and vibrant artists, makers and doers, based in our towns, our villages throughout Ireland. Through these films, the viewer will gain a new and detailed perspective on how the artist prepares and develops their work in an intimate stylised form.

The Samhlú Croí Cruthaitheach films are produced by Galway based Heavy Man Films. Specialising in bespoke storytelling, the company has grown from strength to strength over the last 10 years, creating unique and exciting content for National TV broadcasters, designing and producing TV adverts, online content, documentary and fictional film.

James Mary and Neill Kelly. From their forge in the shadow of Kilkenny Castle a specialist Goldsmith is at work creating bespoke custom jewellery by cold forged hand fabrication. He also made the All-Ireland hurling trophy.

Helen Comerford – For the last 20 years Helen has worked as a painter in encaustics. Based in Kilkenny, her unique approach to her work and its process has resulted in art that has featured in galleries including Imma, Butler Gallery Kilkenny, Hugh Lane Municipal Gallery and Galway municipal collection.

Ian Joyce lives, thinks and works in an ancient kingdom of dry stone, natural springs and wind tossed farms at the farthest most corner of western europe. His art is about survival and transcending the conditions of representation and official memorialization.

Anna Mullarkey’s compositions vary from minimalist music to electronia. Her unique and vibrant physical performances are as captivating as her music. Growing up in Galway, Anna draws inspiration from the sea for her compositions.

Willzee is part of a musical movement that brings his hometown Limerick to the top of the Irish rap scene.

Tatiana Dobos creates ceramic artworks inspired by human emotions. She seeks to materialize in her works the mechanisms of the inner battles, at the same time exploring the anatomy of the aftermath.

Visual Artist Eoin Turner together with his wife, artist Lorraine Mullins; creates magnificent signature bespoke glass designs & sculptures, which have been celebrated around the world.

Andrew Duggan is an Irish artist whose video works, installations and projects explore the complex relationships between self and place. The dominant elements in his work of absence, repetition and transference are used to imbue a connection with constructed or imagined spaces and trace histories.

Mánus Lunny’s music is part of the fabric of the Irish music scene. His talented multi-instrumental abilities have been sought out and experienced on the stages, screens and the airwaves of Ireland and abroad for more than 30 years.

Shane O’Malley emerged from Ireland’s vibrant graffiti subculture. Originally from Navan, Shane now resides in Galway city. He is interested in the themes of identity, mental and emotional health, journey and self-hood. He has developed a unique visual language using bold colour and simple geometric patterns.