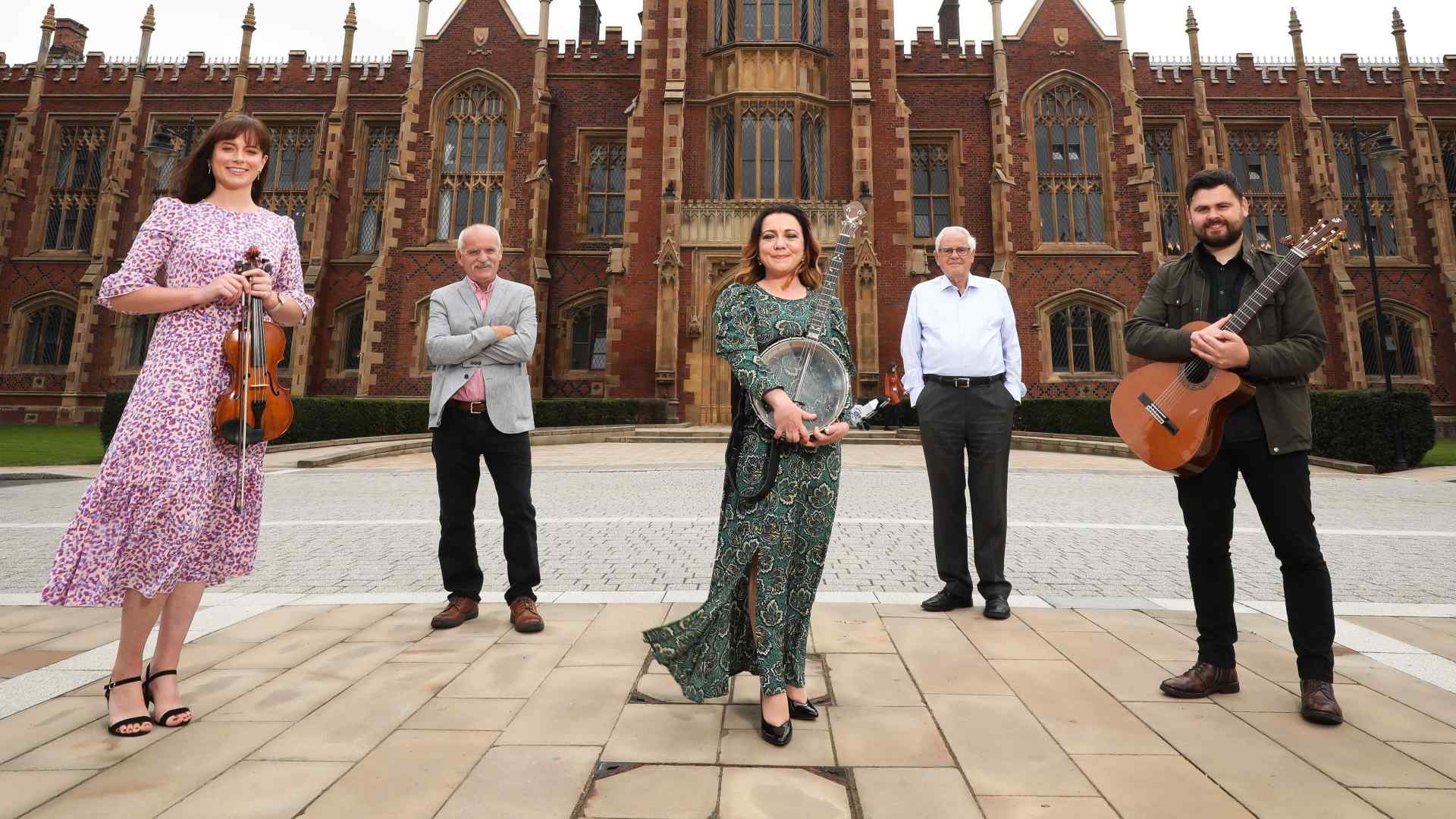 TG4 announces the recipients of the 2021 Gradam Ceoil Awards which pay homage to musicians who have advanced, strengthened, and preserved traditional music in Ireland. The awards ceremony now in its 24th year, will air on TG4 on Halloween night to celebrate TG4’s 25th birthday from the Whitla Hall in Queens University Belfast.

The 2021 Musician of the Year will be awarded to Angelina Carberry. Angelina was born in Manchester but is living in Longford since the 1990’s, where her family are from.

Angelina started playing traditional music on the tin whistle, but quickly followed in the footsteps of her grandfather Kevin and took up the banjo. The Carberry clan are renowned musicians, her father Peter plays the button accordion, his uncle Peter the uilleann pipes, his son Noel also the uilleann pipes and Peter’s grandsons Diarmuid and Kevin also play the uilleann pipes. Though her style echoes that of her grandfather, Kevin, who was a well-known player at Longford céilís and house dances, Angelina has developed a light-handed, sparkling touch on the banjo.

She was also a member of the renowned, all-female band, the Bumblebees. The group, which included last year’s Gradam winner, harper Laoise Kelly, accordionist Colette O’ Leary, with Angelina on banjo and mandolin.

From Tulla in east county Clare, fiddle player, Sorcha Costello will be awarded the title of Young Musician of the Year. Sorcha’s musical lineage is peerless; her mother Mary MacNamara is a renowned concertina player and her grandmother Ita’s musical pedigree reached back generations.

Steve Cooney will be awarded Composer of the Year. Born in Melbourne Australia in 1953, he came to Ireland in 1980 and maintains his connections with the Aboriginal culture there, into which he was initiated. He has ancestral links with Tipperary, Cavan, and Galway. Steve Cooney is best known for his development of an influential style of guitar accompaniment to traditional Irish dance music which he developed in West Kerry and for which he won the National Entertainment Award with Séamus Begley in 1997.

Tyrone’s Niall Hanna is this year’s Singer of the Year. His grandfather Geordie Hanna, Geordie’s sister Sarah Anne O’Neill, and the extended Hanna and O’Neill families ensured he was immersed in music from a very early age. Niall has embraced the wider Ulster traditional song repertoire while also developing his own song writing talents. His sense of place and family strongly influence his musical journey, and his solo work and various musical collaborations continues to bring Ulster music and song to a wider Irish and International audience.

This year’s Lifetime Achievement Award goes to Cork native Seán Ó Sé who first rose to fame as a singer, singing and recording the most popular song An Poc Ar Buille, with Seán Ó Riada and Ceoltóirí Chúlainn back in the 60’s. Since then, his voice has been recognized as one of the great voices of this country and cannot be surpassed while singing.

The Glengormley School of Traditional Music is awarded the Outstanding Contribution Award for 2021. Over its twenty-year history, this essential hub has nurtured countless musicians, many of whom have gone on to work professionally. The summer courses in Donegal bond young people socially and musically and instil in them a deep passion for music-making.

Gradam Ceoil TG4 is the premier annual traditional music awards scheme and academy. An independent panel of adjudicators selects recipients each year. It is not a competition. The Gradam Ceoil recipients are presented with a specially commissioned piece by leading sculptor John Coll as well as a small stipend.

This year’s awards will be presented at the Gradam Ceoil TG4 Concert in the Whitla Hall in Queen’s University Belfast and will air on Halloween night at 9:30pm.

Due to Covid-19 restrictions, tickets will not be on sale to the public for this concert.

TG4 Director General, Alan Esslemont, says: “Gradam Ceoil TG4 is celebrating its 24th year this Halloween night which coincides with TG4’s 25th birthday. The awards pay homage to those who have done so much to advance and strengthen traditional music in Ireland and around the world. This year, we dedicate the awards ceremony to Mary McPartland whom we remember fondly. Mary initiated the Gradam Ceoil awards 24 years ago. I would like to congratulate all of this year’s winners. We are delighted to award them the highest honour in Irish music. Gradam Ceoil TG4 will take place in Belfast for the fourth year running, a successful collaboration with Belfast City Council, ILBF, Red Shoe Productions and TG4.”

Northern Ireland Screen’s Head of the Irish Language Broadcast Fund, Áine Walsh says: “Northern Ireland Screen’s ILBF was delighted to support Gradam Ceoil TG4 for the past 4 years, it was wonderful to see this musical jewel in TG4’s schedule broadcast live from Belfast. Gradam Ceoil TG4 quickly became a staple event with the live show and fringe festival providing a fantastic platform to celebrate Northern music and talent. We will watch the final show from Belfast confident that Gradam has left a strong musical legacy in its wake.”

Lord Mayor of Belfast, Councillor Kate Nicholl said: “This is a fantastic event which showcases the very best in traditional music and song, and we’re delighted to play host once again in the final year of its residency here in Belfast. As a music city, we take great pride in our musical heritage and traditional music is a key part of that. The ceremony is a fantastic celebration of this genre and is held in high esteem across Ireland and beyond. It promises a spectacle of live performances, showcasing world class talent right here in Belfast. Warmest congratulations to each award recipient.”