Colmcille - An Naomh Dána
Celebrating Saint Colmcille, who was born 1500 years ago 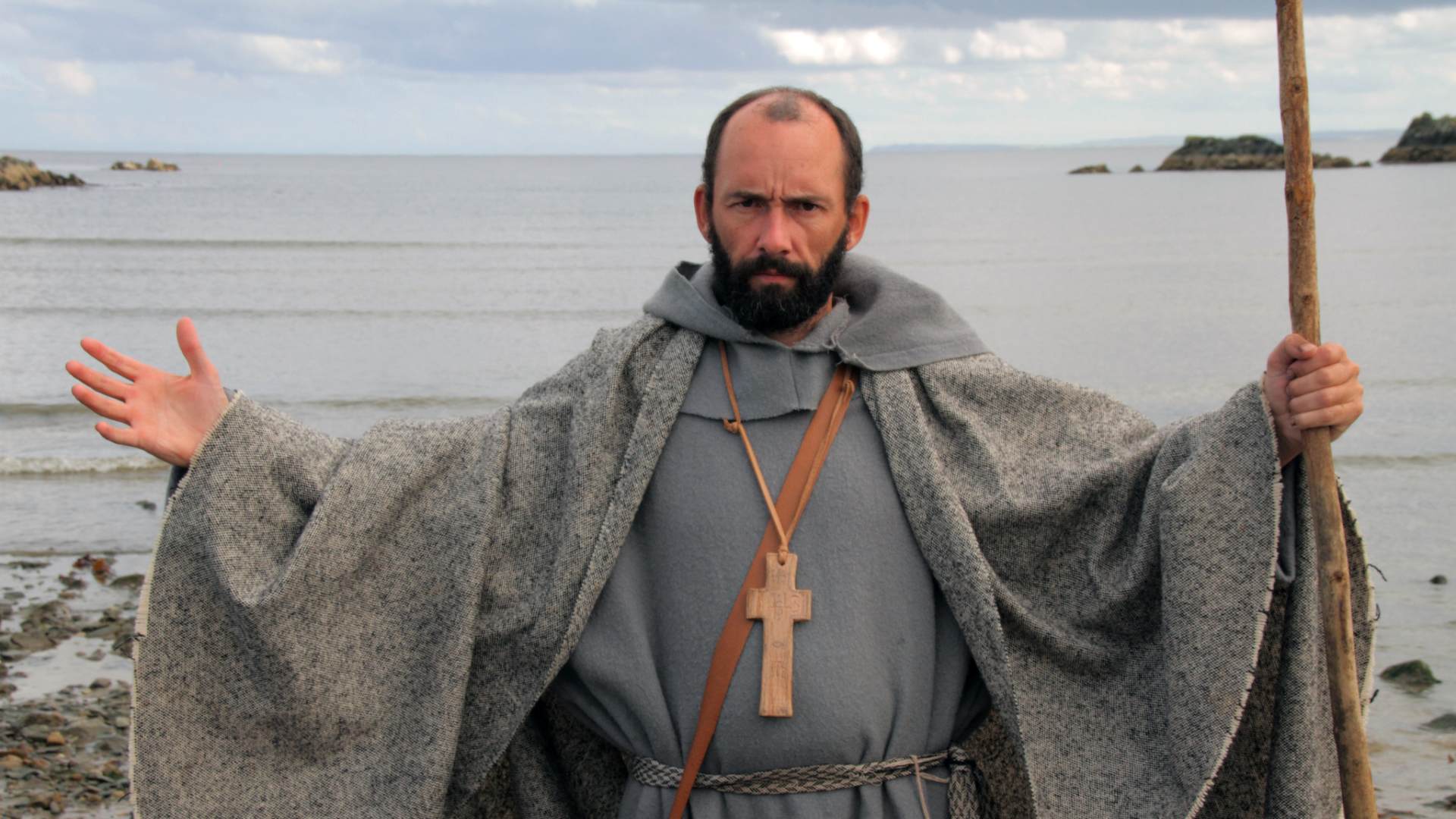 Warrior, poet, holy man: the exciting life story of one of Ireland and Scotland’s most important saints. Celebrating Colmcille, who was born 1500 years ago – Dec 7th 521A.D.
A new documentary to broadcast on TG4 on December 7th at 9:30pm to celebrate the Irish and Scottish saint who was born 1500 years ago. The documentary will take the viewer from Donegal to Iona in a quest for the truths within the myths surrounding Donegal’s finest son, troublemaker, copyright infringer, warrior and exile, yet one of Ireland’s most revered saints – Colmcille.
Though known by many as the Dove of Peace, he was at the centre of bloody battles, before founding a monastery on Iona, laying the foundations for the island to become a beacon of civilization in the Dark Ages – he’s even said to have taken on the Loch Ness Monster!
But who was Colmcille, the Irish abbot, known in Scotland as St. Columba? His exploits as poet, scribe, politician, warrior, and holy man, became notorious throughout Ireland and Scotland. This exciting new documentary, explores the man, the myth, and his legacy today.
Born in Gartan, near Lough Gartan in Co. Donegal in 521 A.D, Colmcille seemed to attract trouble. After clashing with Finnian over the copying of a manuscript he went into exile, founding a monastery on Iona that became a renowned centre of spirituality and learning. Today Colmcille is revered as one of Ireland and Scotland’s major saints and texts about him have made an important contribution to our knowledge of life in the era.

Dramatic reconstruction is interwoven with expert accounts as we rediscover the achievements of this most uncompromising of saints.

Colmcille – An Naomh Dána is produced by Abú Media and MacTV with funding from Northern Ireland’s Screen’s Irish Language Broadcast Fund and MG ALBA.
The feature documentary will air simultaneously on Tuesday 7th December at 9:30pm on TG4 and on BBC ALBA in Scotland including the BBC iPlayer in the UK and worldwide on the TG4 player.

Alan Esslemont Director General of TG4 said “Addressing the Scottish Parliament in 2016, President Michael D. Higgins reflected on the relationship between Ireland and Scotland, “given our shared and complex history, it has often been difficult to say where the Irish ends and where what is Scottish begins. Or the other way round.” Colm Cille, warrior-cleric-politician, was in the vanguard of what was consciously the Irish colonisation and plantation of Scotland, spreading Irish Christianity throughout Scotland and using the names for Ireland, Éire, Fódhla, Banbha, Ealg to symbolically stake out Irish ownership of key places in Scotland, Strathearn (the Valley of Ireland), Glenelg (the Glen of Ireland) Atholl (New Ireland), Banff (Ireland) and Elgin (Little Ireland). I am delighted, to mark the 1500th anniversary of his birth, that TG4 and our Scottish sister channel, BBC ALBA, are bringing a fresh and compelling documentary to screens in both of our countries on the life of this most obstinate, avant-gardist, bold and influential Gael who permanently changed both Ireland and Scotland.”

Chief Executive of Northern Ireland Screen’s Irish Language Broadcast Fund Áine Walsh said “Colmcille is recognised as an Irish saint and a Scottish saint and has left his mark on the folklore and landscape of both countries and as a result the Irish Language Broadcast Fund was delighted that this project came before us and to commemorate 1500 years after the saint’s birth. Not only did it provide an opportunity to explore the life of the bold saint, but it also provided another opportunity to strengthen the links between Ireland and Scotland on a significant program which will be broadcast on TG4 and BBC ALBA. Partnerships like this are very important in our efforts to deliver engaging and high-quality content, and this program certainly meets that criterion.”

Margaret Cameron Commissioning Editor & Head of Creative Collaborations added “This programme was a very natural fit for co-production, and we’re delighted to see this production and broadcast collaboration result in high quality content to the BBC ALBA audience. Creative ties between Ireland and Scotland are strong and BBC ALBA was delighted to commission the project to mark 1500 years since the birth of Calum Cille and to build on those creative bonds.”

Also broadcasting on TG4 on December 7th as part of the multi-faceted commemoration of the 1500th anniversary of Colmcille’s birth is Athbheatha: Colmcille ildánach 2021. The Royal Irish Academy (RIA) has commissioned seven new artworks in the visual arts, music and literature with the support of the Department of Foreign Affairs. Ag Ceiliúradh Colmcille talks to the artists involved in each commissioned piece and finds out the inspiration and artistry behind these unique works of art. Artists features are caligrapher Timothy O Neill, glass artist Róisín de Buitléar, poets Biddy Jenkinson, Sandy Nic Dhòmhnaill Jones, Simon Ó Faoláin, writer Proinsias Mac a’ Bhaird and musicians Zoe Conway, Julie Fowlis, Éamonn Doorley and John McIntyre.

Another online series Seanchas Colmcille will be broadcast online on www.colmcille.org and on MOLSCÉAL‘s social media platforms. Renowned storyteller Gearóidín Breathnach and Ligid Productions have produced a series of videos in places in Donegal associated with Saint Colmcille as part of Colmcille 1500.