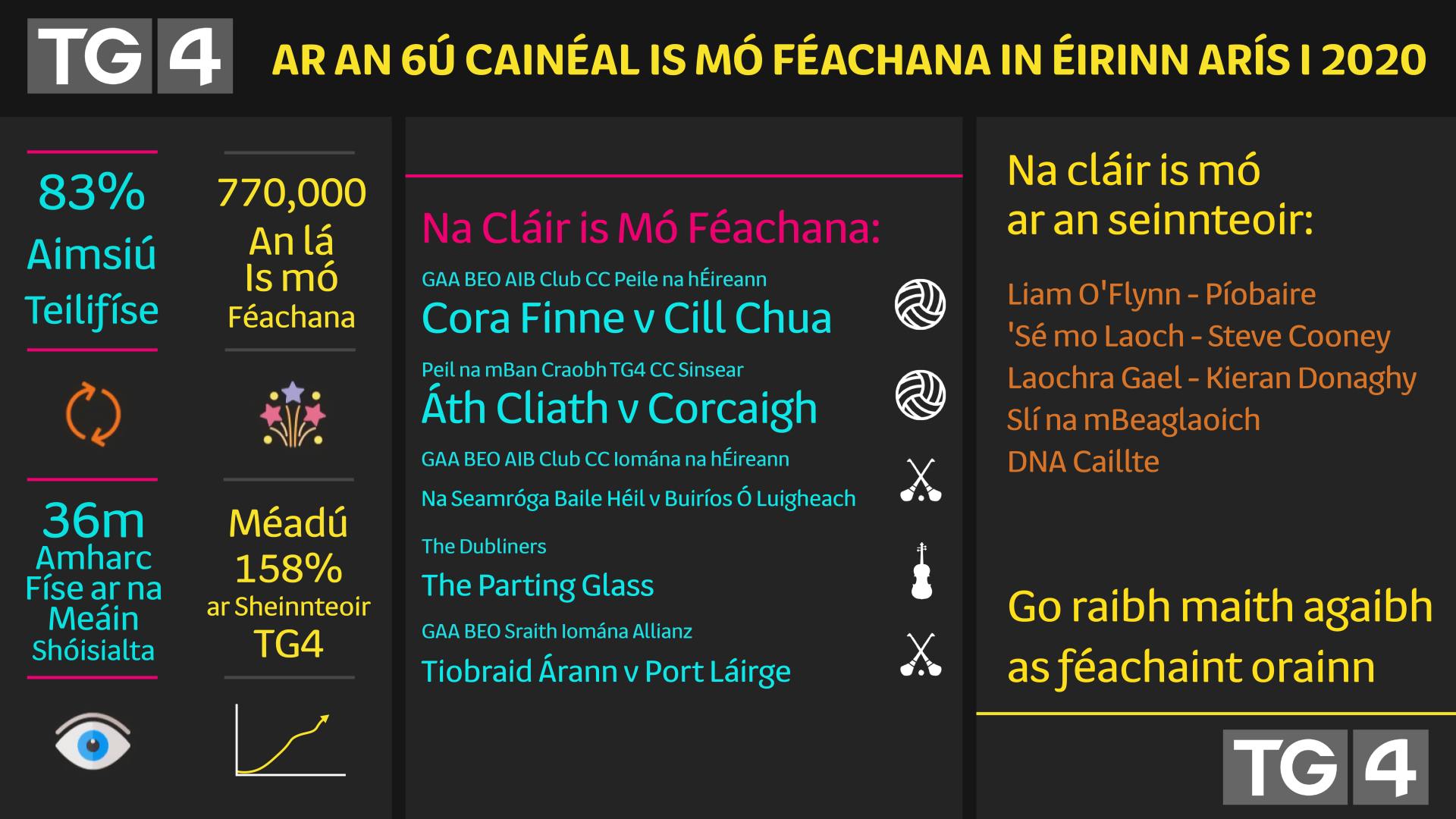 TG4 retained its position as the 6th most watched tv channel in Ireland in 2020. TG4 moved up one place from 7th place in 2019 where it had ranked since 2014. TG4 is now watched more than BBC Two, Virgin Media Three and Channel 4 in Ireland.

GAA BEO‘s coverage of the AIB Club Football Final between Galway’s Corofin and Down’s Kilcoo was the most watched programme on TG4 in 2020. The game had the highest audience reach at 480,600, an average audience of 177,200 viewers and 17.6% share of the viewing audience at the time. The 20th TG4 LGFA Football final Peil na mBan Beo which took place on December 20th was the second most watched programme on TG4 last year. It drew an average audience of 169,900 and had a share of 21.2%.

The Christmas Day broadcast of The Dubliners – The Parting Glass was the most watched programme on TG4 on Christmas Day since 2009. It had an audience of 156,600 and a share of 11.3%. John Sheahan’s 80th Birthday Live from Vicar St which aired on TG4 on St. Patrick’s Day was also a huge hit with viewers. 123,200 on average tuned in to watch the concert.

Documentaries form the backbone of TG4’s schedule and they drew large audiences again in 2020. The most watched documentary in 2020 was Liam O’Flynn – Píobaire which told the story of master of the uilleann pipes Liam O’Flynn. The documentary was watched by an audience of 81,500 on Easter Sunday. Laochra Gael – Iggy Clarke which told the story of Fr Iggy was the second most watched documentary last year. Iggy was the rock in Galway’s hurling half back line in the 70’s. The documentary was watched by 74,200 people and had a share of 9.5%

Alan Esslemont, Director General of TG4 said “None of us have seen a year like 2020. It was a year of loneliness, confusion, bewilderment and sadness. But it was also a year of humanitarian and public service achievements. In the media, we look back on 2020 as the year that brought about the huge acceleration of nonlinear digital media. I would like to pay tribute to the in-house staff of TG4 and all the independent producers who work with us. Together as a team, we have been very successful in meeting audience demand and strengthening TG4 ‘s personality and brand at home and around the world. We are very grateful to the Government for their additional support in Budget 2021. This will help us reboot TG4 this year and we will work to convince the Future of Media Commission that the media ecosystem in Ireland should be radically reimagined from 2022 onwards.”