New Ipsos MRBI Opinion Poll in Donegal for TG4 shows Sinn Féin’s Pádraig MacLochlainn in contention to return to the Dáil, and Independent candidate Peter Casey not in the running.

The results of a new TG4/Ipsos MRBI Donegal constituency poll for TG4’s ‘Vóta 2020’ shows Sinn Féin’s Pearse Doherty likely to receive a quota and a half, with an impressive 27 per cent of first-preference votes. Fine Gael’s Joe McHugh is polling strongly in second place, at 17 per cent of first preference votes. Pádraig MacLochlainn, also of Sinn Féin could regain the seat he lost in the 2016 General Election from Pearse Doherty’s surplus. There is a possibility that Fianna Fáil could win two seats in the five-seater constituency. The last seat looks like a battle of transfers between one of the Fianna Fáil candidates and Independent current TD Thomas Pringle. Independent Peter Casey has polled poorly at 2 per cent of the vote, and there isn’t any sign of the Green wave in Donegal with Michael White of The Green Party polling at 4 per cent.

Joe McHugh of Fine Gael, and current Minister for Education and Skills, records 17 per cent of the vote, just enough to be elected on the first count and is very likely to retain his seat for Fine Gael. While Pearse Doherty and Joe McHugh look comfortable, the battle for the remaining three seats should prove interesting.

When Charlie McConalogue’s vote is combined with Pat ‘the Cope’ Gallagher’s vote, the Fianna Fáil total is 22 per cent in Donegal, suggesting there is a seat or possibly two for Fianna Fáil. Charlie McConalogue is 5 per cent short of the quota, at 12 per cent, and Pat ‘The Cope’ Gallagher is at 10 per cent.  Two seats for Fianna Fáil is a real possibility, if there is a sizeable gap between the lowest polling Fianna Fáil candidate and the highest polling independent candidate, and if the trailing Fianna Fail candidate proves reasonably transfer friendly.

As the smaller parties and Independents are eliminated, Thomas Pringle could benefit from his independent status, although he may have quite a bit of ground to make up if he is to overtake either the second Sinn Féin or second Fianna Fáil candidate.

In 2016, Fianna Fáil took two seats (Charlie McConalogue and Pat ‘the Cope’ Gallagher) and Fine Gael one seat (Joe McHugh). Sinn Féin’s Pearse Doherty was also elected, but the party missed out on a second seat, when Sinn Féin’s Padraig MacLochlainn was narrowly defeated by Independent Thomas Pringle.  Similarly, for Fine Gael, two TDs in Donegal turned into one TD when Donegal changed from two three-seater constituencies to one five-seater for the 2016 election.

But every election brings its own surprises and, for example, a green wave that catapults Michael White (on 4 per cent) into contention cannot be ruled out. Neither can we be sure that Peter Casey (on 2 per cent) will not pull another rabbit out of the hat.

All interviewing was conducted before Peter Casey confirmed he was also running in Dublin West.  Arthur McGuiness was not on our ballot paper.

This is the first of TG4 / Ipsos MRBI constituency polls as part of TG4’s election 2020 coverage. Next Tuesday (28 January) ‘Vóta 2020’ will report the Ipsos MRBI opinion poll in the Galway West constituency and the following Tuesday 4 February from the Kerry constituency. 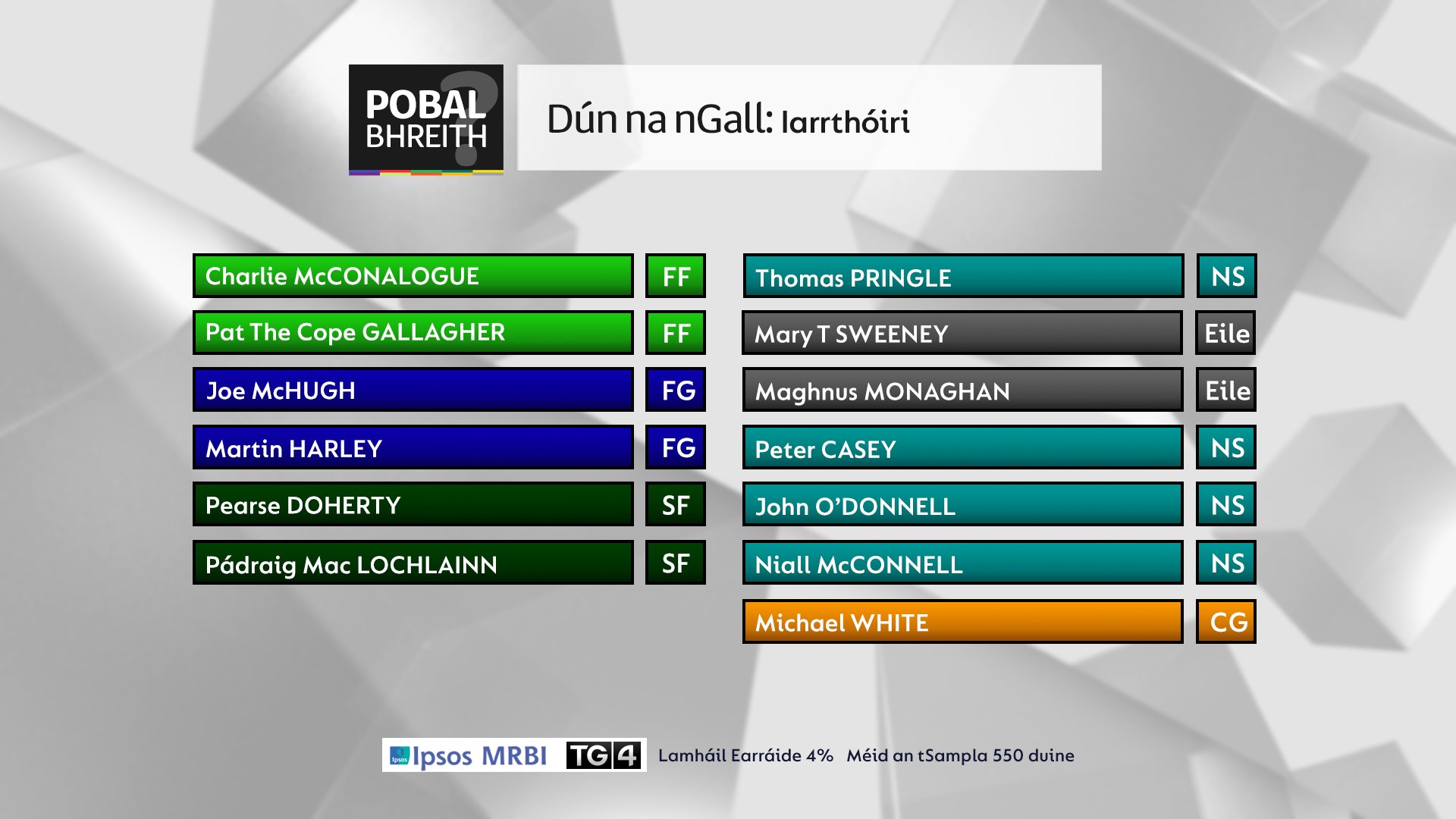 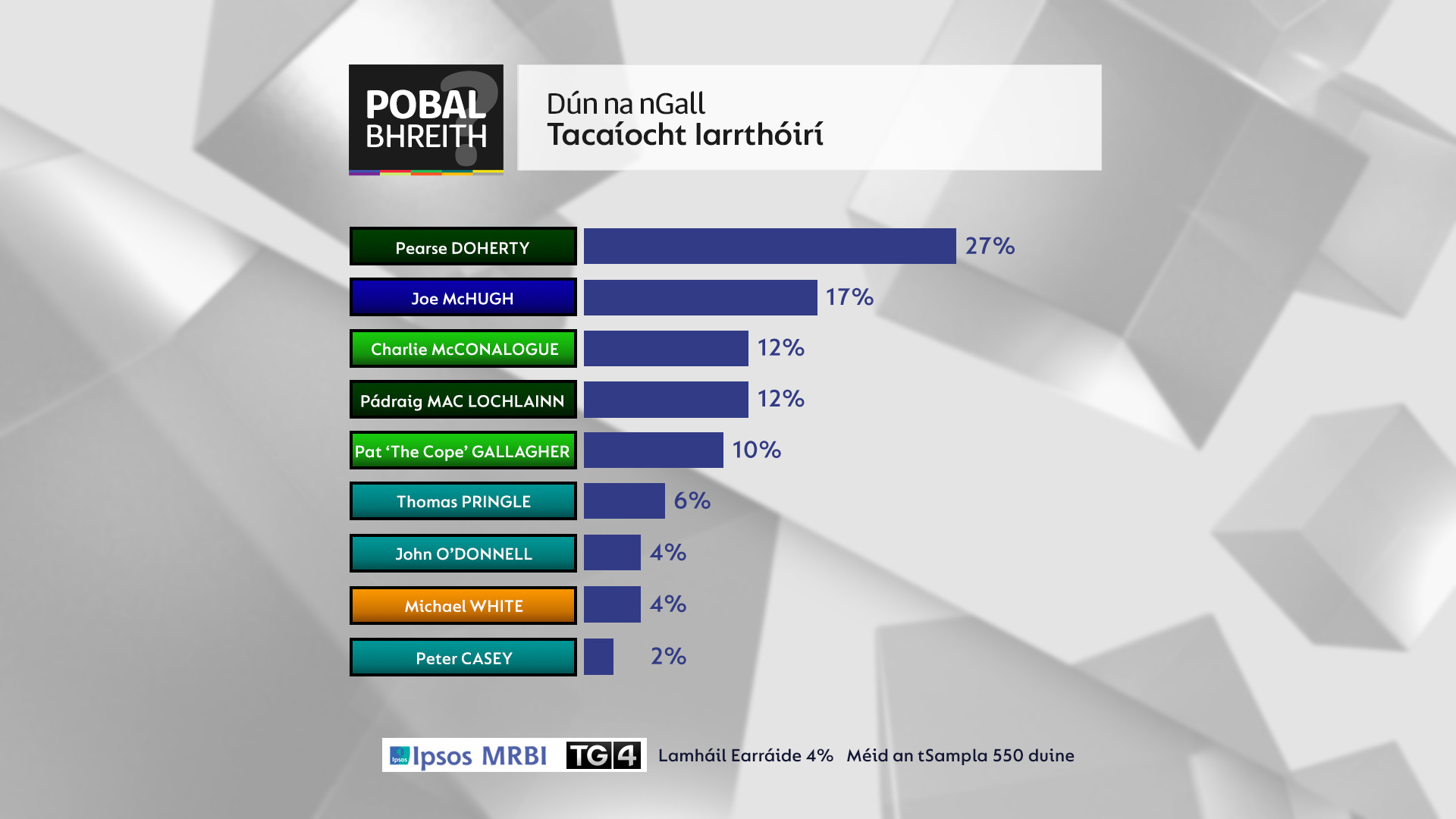 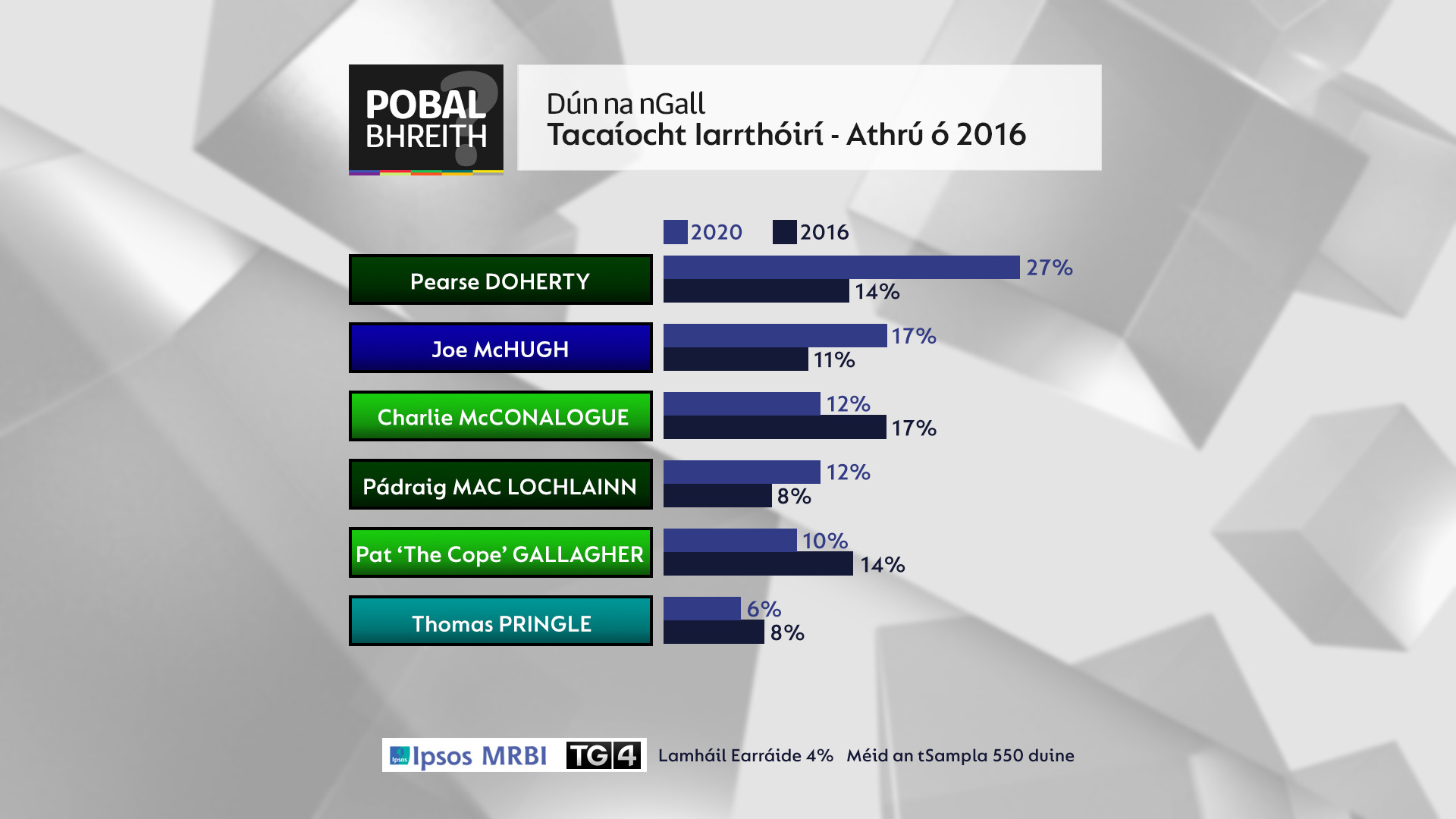 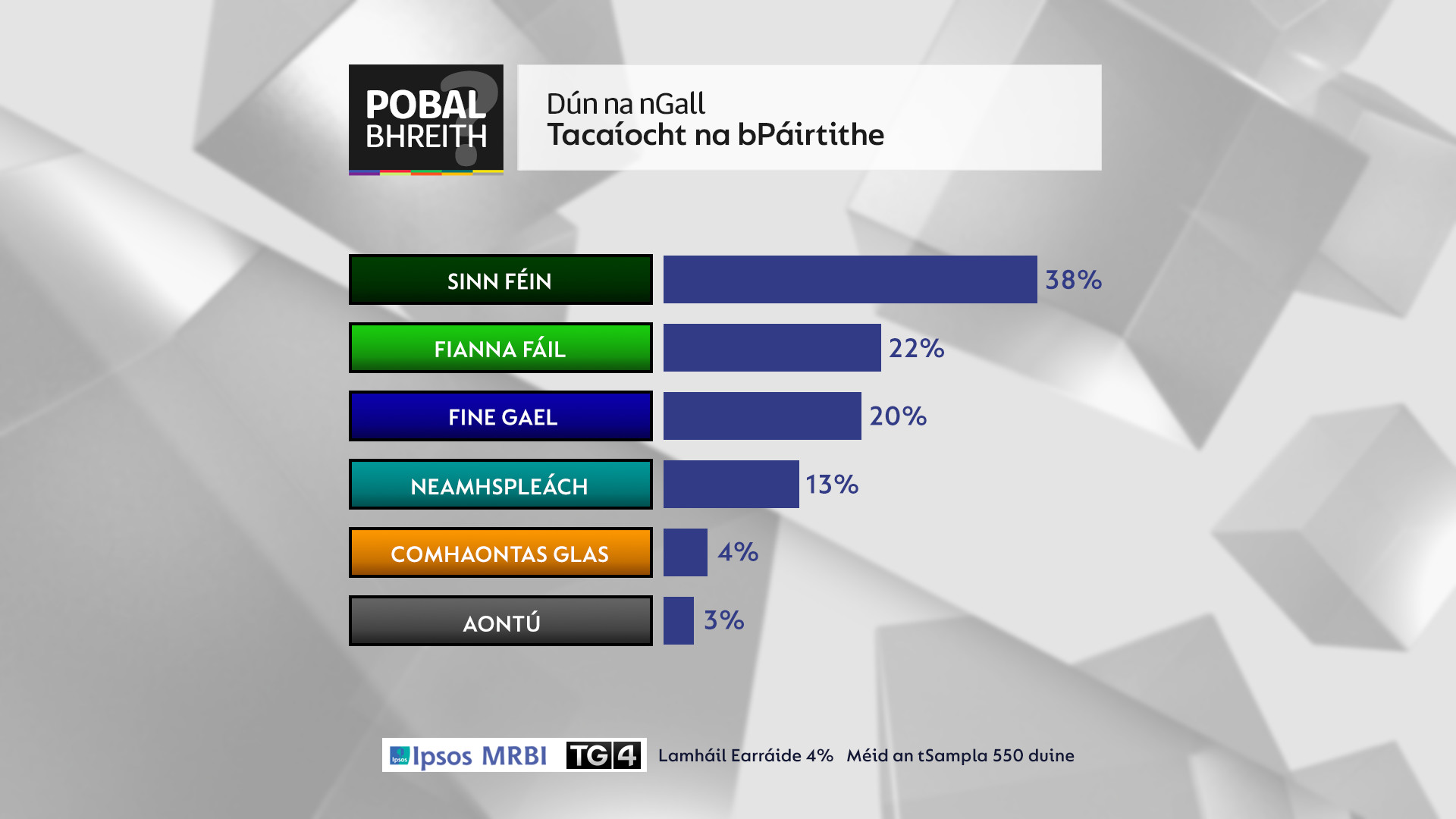 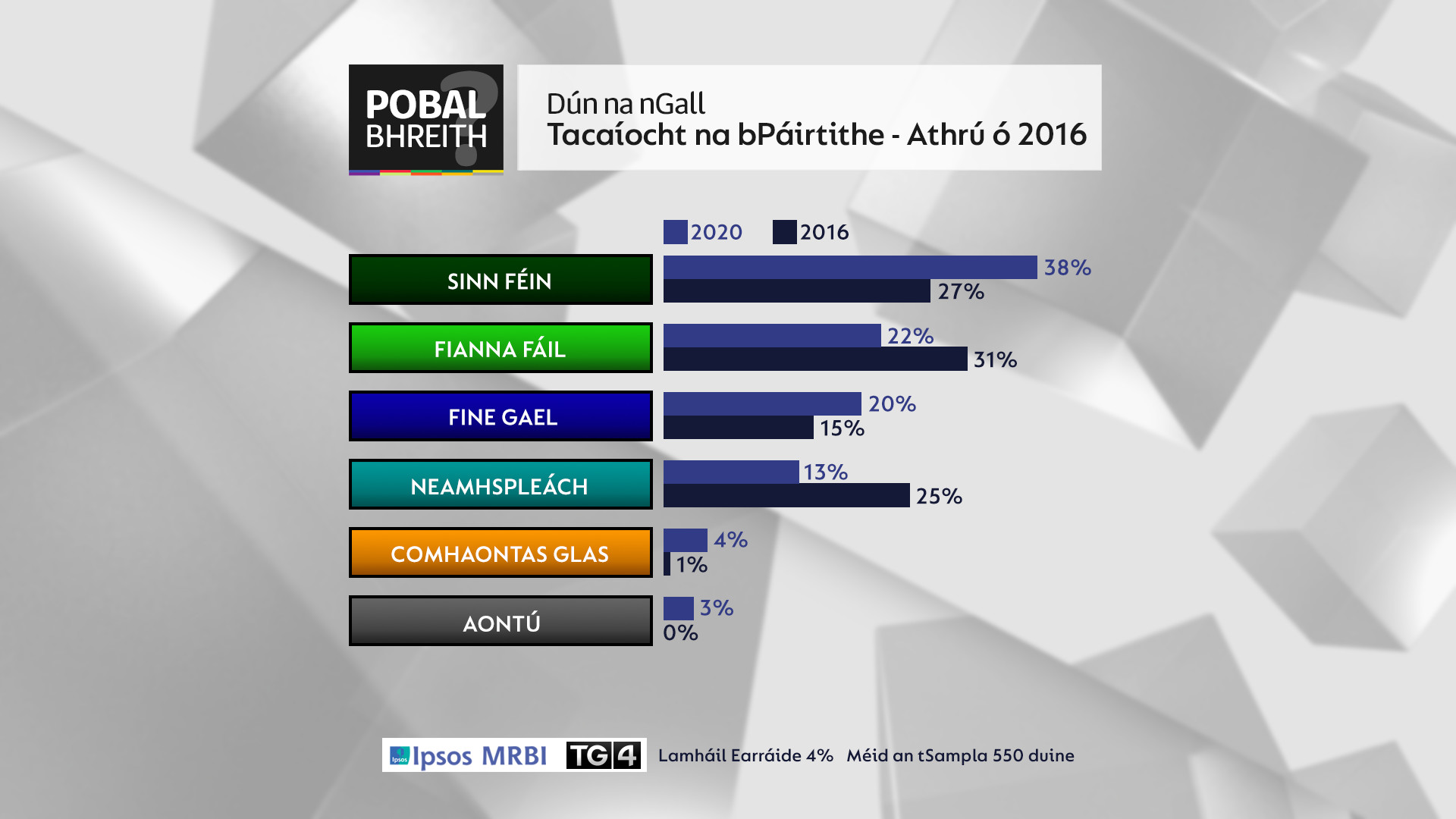