TG4's Annual Report for 2019 reveals many successes for the station 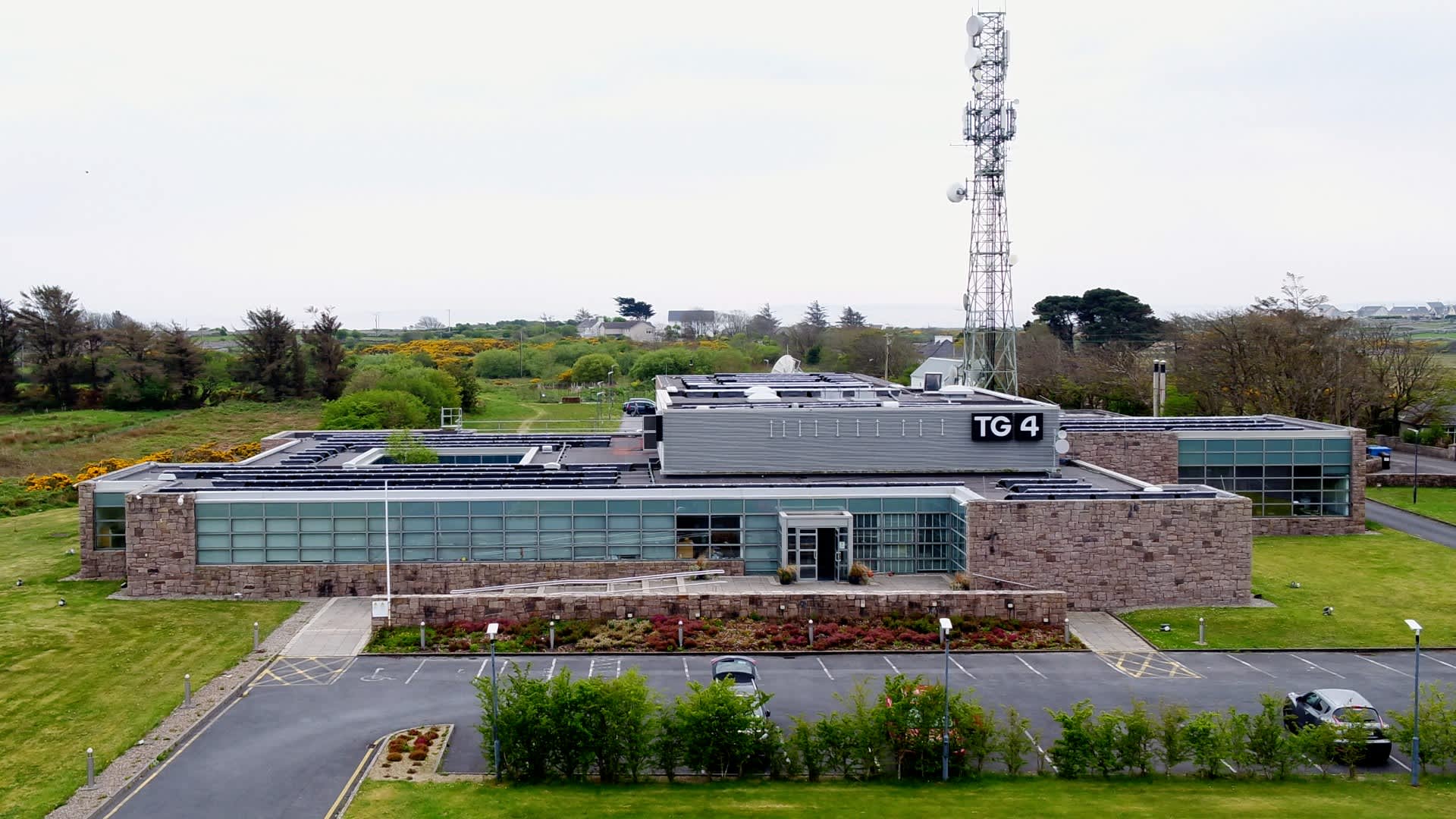 A record year for TG4 is set out in the station’s Annual Report for 2019. For the first time ever since it began broadcasting, TG4 was the 6th most viewed channel in Ireland. TG4 had 71% reach with Irish speaking audiences in 2019, an exceptional level of engagement. €26.3m spent on Irish language content.

2019 was a year of many successes for TG4. The broadcaster continued to champion Irish culture and creativity, to foster new talent and to launch new digital initiatives. Through content and programming, TG4 grew it’s audience on both linear and non-linear services.  TG4 also made a real contribution to Irish society and to the creative economy through its support of the independent production sector.  TG4’s focus on cultural content (documentaries, sport, culture, music, arts, and children’s programming) and on the promotion of Irish as a living, working language, highlight the channel’s central role as Ireland’s national Irish language Public Service Media and its contribution to Irish audiences and diaspora worldwide.

In 2019, TG4’s national television audience share increased to 1.84% (consolidated, 2.02% live) and to 6th most watched channel in Ireland. This is the highest ever audience ranking for TG4 since the channel was launched in 1996. TG4 had a 71% reach with Irish speaking audiences, an exceptional level of engagement with its core audience. Viewership to the TG4 player increased, giving access to Irish language content to global audiences. In 2019, the station strengthened audience connections across all social media platforms, and continued to grow engagement and viewers throughout the year.

TG4 continued to invest in Ireland’s creative industries, particularly in regional areas.  In 2019, TG4 invested €23m in the independent production sector in Ireland, of which €21m was invested in regional independent production companies. TG4’s partnership with the Broadcasting Authority of Ireland, Screen Ireland, the Irish Language Broadcast Fund in Northern Ireland enabled the funding of high-end, audience focused Irish productions to be produced in Irelands regions and Gaeltacht areas.  TG4 also placed a strong emphasis on supporting the development of young Irish talent in the industry, initiating a training development scheme in partnership with Údarás na Gaeltachta and the independent production sector.

TG4 was at the heart of community events in 2019, showcasing the best of Irish cultural gatherings throughout the year.  TG4 celebrated a record attendance of 56,114 at Croke Park for the TG4 sponsored Ladies Football Championship in September. Other live events broadcast in 2019, included Gradam Ceoil 2019, Oireachtas na Gaeilge, Fleadh Ceoil na hÉireann, Comórtas Peile na Gaeltachta, and GAA League and Underage Championship finals.   In addition to high-quality broadcast programming, TG4 invested in Irish language feature films. The first ‘Cine4’ feature film, ‘Finky’ was launched at the 2019 Galway Film Fleadh and later in the Autumn, ‘Arracht’ was premiered at the Tallinn Film Festival in Estonia. A further 2 films were in production in 2019 and 2 more in development.  International co-produced series, included ‘An Balla’, the story of some of the world’s most iconic dividing walls and the human stories behind them; and ‘Taoide’, which reveals the power and mysteries of the earth’s tides.

Director General of TG4, Alan Esslemont said, ‘TG4 had a very good year in 2019 in terms of viewership, the first year in which we were the 6th most watched channel in Ireland, above channels such as BBC Two and Channel 4. Through the TG4 Player, we provide worldwide access to TG4’s Irish language content to global audiences without the need for paid subscriptions and our Player audience grew strongly in 2019. In the Government Budget at the beginning of October 2019, TG4 was given an additional allocation of €1m for 2020. To date, just over €3.5m of the BAI recommended €6m has been allocated and there is a cumulative gap in the total funding of €9.87m. We will continue with our campaign to achieve the required level of strategic funding for 2021. I am extremely proud of all of our team in Baile na hAbhann and of all of the Independent Producers working with TG4 throughout Ireland for a record year in 2019.’

Cathaoirleach of the TG4 Board,  Siún Ní Raghallaigh said, ‘I would like to thank the independent production sector and everyone who works in TG4, led by the dynamic Ard-Stiúrthóir, Alan Esslemont. With so much international content available, TG4’s mandate is more important than ever before — focusing on content which is distinctively Irish and which celebrates our living culture.’ 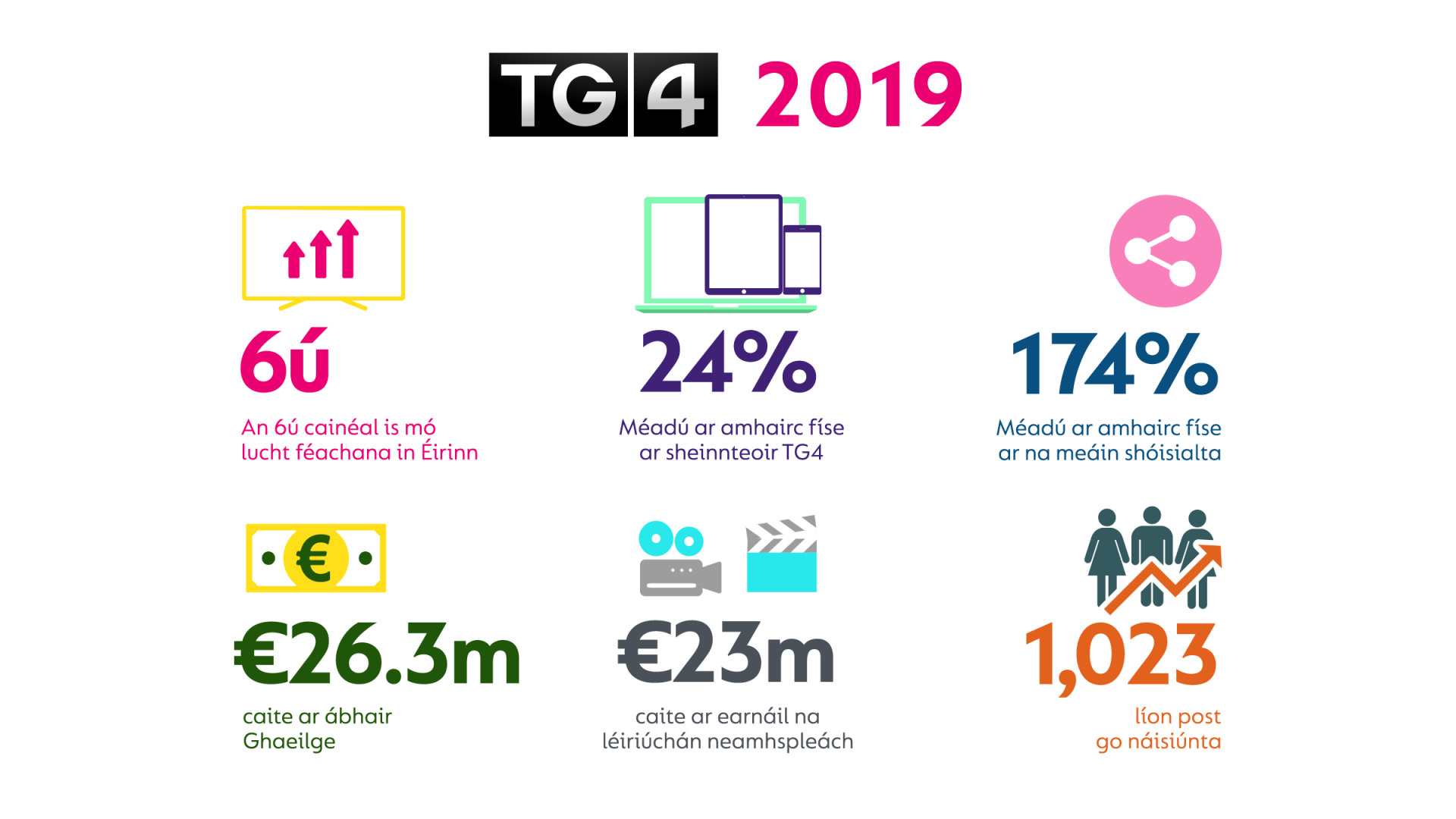