The results of a new TG4/Ipsos MRBI constituency poll carried out for the ‘Vóta 2020’ programme shows a fascinating contest in store in Kerry for the five seats on offer.  13 names are on the ballot and the competition is fierce.  Sinn Féin’s Pa Daly looks set to set to pass the quota with 20% of first preference votes and to keep the seat that retiring party stalwart Martin Ferris has held since 2002, capitalising on the current wave of support that Sinn Féin have nationwide. Michael Healy Rae is in joint-first position with a first-preference vote of 20%.  However, there is no certainty that his brother Danny will keep his seat, polling at 4%.  Minister of State for Tourism and Sport, Fine Gael’s Brendan Griffin reaches the quota needed with a first preference vote of 17% according to the poll which puts him in strong contention to take one of the five seats.

What of the other two seats?  There is quite a gap from between Brendan Griffin on 17 and the fourth-place candidate Norma Foley, Fianna Fáil on 10%; as many as 5 of the remaining candidates will feel that they are in the running for the last two seats. 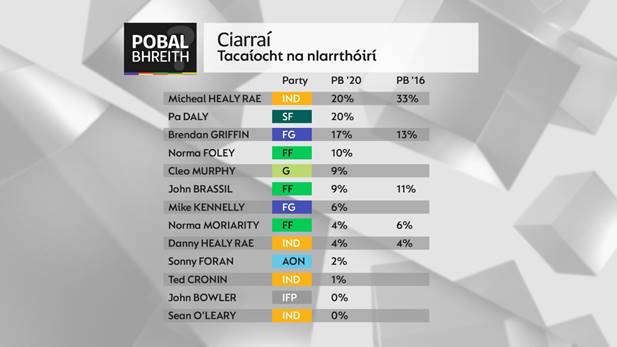 This survey was conducted among a sample of 538 adults aged 18 upwards in the Kerry constituency on behalf of TG4 by Ipsos MRBI. Interviewing took place on Saturday 1st and Sunday 2nd February. Margin of Error is +/- 4%

Traditionally Kerry was split into two constituencies, Kerry North and Kerry South, with a combined representation of 6 seats in Dáil Éireann. The 2016 General Election saw a significant change to this; a reduction in the representation to 5 seats and one single constituency covering the entire county. As ever, transfers will be vital, both where parties and areas are concerned.

Party support has thrown up a fascinating result in that Fine Gael, Fianna Fáil and the combined Healy Rae support are all tied at 23%; however the comparison with results from the General Election in 2016 will leave both main parties feeling considerably happier about that than the Healy Raes (FF up from 16%, FG up from 21%, Healy Raes down from 38%). Sinn Féin look set to increase their support to 20%, beating the quota in the process, while the Green Party look to have gained substantially from GE ’16 to put themselves in the running for the last seat.

2016 saw both Michael Healy Rae and Danny Healy Rae elected, along with Martin Ferris of Sinn Féin, Brendan Griffin of Fine Gael and John Brassil of Fianna Fáil. Martin Ferris has decided not to contest this election, as has the Labour Party in Kerry; the first time since the 1930s when there has not been a Labour Party candidate in Kerry.

Fianna Fáil exceed a quota in terms of their combined support, and will win at least one seat according to the poll, but who will get it? John Brassil is the incumbent,but has only served one term and so could be vulnerable. Norma Foley, former Mayor of Kerry and daughter of the late Fianna Fáil TD Denis Foley, is a very strong candidate and in this poll has pipped John Brassil, gaining 10% of first preferences compared to Brassil’s 9%. The direction of the Fianna Fáil seat in Kerry could well be determined by the transfers from the third FF candidate Norma Moriarty, currently back on 4%.

What of the last seat? This poll has the following In the running are; the loser of the Foley/Brassil battle, Green Party candidate Cleo Murphy (on 9%), Fine Gael’s second candidate Mike Kennelly (on 6%) and also Danny Healy Rae, who while seemingly out of it on 4% but who may still have a chance as he will be chief beneficiary of his brother Michael’s surplus transfers

Both Cleo Murphy and Mike Kennelly are new candidates; Murphy is a former Radio Kerry journalist while Kennelly is a Listowel-based councillor and member of a famous GAA family.

With the bottom four candidates (Sonny Foran from Aontú, independents Ted Cronin and Sean O’Neill along with John Bowler from the Irish Freedom Party) at 2% or less, it is the direction of any surplus transfers from those elected early along with the order of elimination of the next candidates that will determine the result of the last seat in an intriguing battle. With several new candidates in the mix for the last seat, that’s difficult to determine, however geography could well prove the key here, along with the Healy Rae factor of course.

The Healy Raes will feel that they can pick up momentum in the last week before election day. While their efforts to divide the county between hem hasn’t seemed to be effective up to now, they certainly won’t be underestimated by the other candidates and may yet prevail.

Notes to the Editor:

This is the final in a series of TG4 /Ipsos MRBI constituency polls as part of TG4’s Election coverage.
The margin of error is 4%.

This survey was conducted among a sample of 538 adults aged 18 upwards in the Kerry constituency on behalf of TG4 by Ipsos MRBI. Interviewing took place on Saturday 1st and Sunday 2nd February. In all respects, the survey was conducted within the guidelines laid down by AIMRO and by ESOMAR. Interviews were conducted via CATI (Computer Aided Telephone Interviewing). Respondents were selected from a database of both landline and mobile numbers created via Random Digit Dialling.
At analysis stage, the sample was weighted to align the profile of voters in this poll with the profile of voters as indicated by the Irish Times/Ipsos MRBI Exit Poll 2016. In addition, all respondents were asked how much their vote counts on a scale from 1 to 10 where 1 means it “makes no difference” and 10 means it “makes all the difference”. Those answering 1 to this question were treated as non-voters and were excluded from our candidate preference calculation, along with those who don’t know how they will vote or said they will not vote.