BFI launches ‘See Yourself on Screen Challenge’, calling on 4 - 18 year olds to make their own mini-TV show whilst in lockdown

Backed by doctor and TV personality Dr Ranj, with chance for young people to have their creations shown on national TV 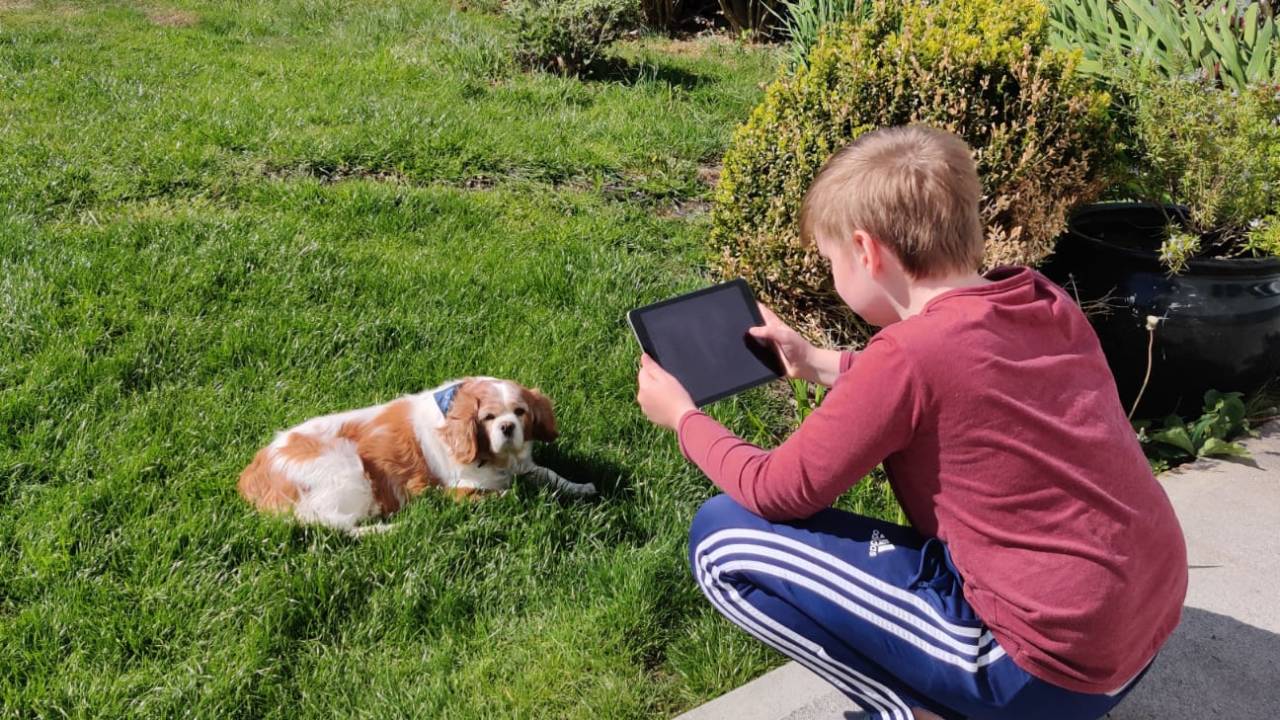 The BFI launches the See Yourself on Screen Challenge, calling on young people aged 4-18 from across the UK and Ireland to create their own idea for a mini-TV show they can film at home while on lockdown.  Backed by doctor, TV personality and See Yourself on Screen Challenge Ambassador Dr Ranj, the Challenge will see winning entrants receive expert tuition before their mini-TV show is aired on national TV across the Public Service Broadcasters.

The See Yourself on Screen Challenge is a pan-industry initiative, led by the BFI through the publicly-funded Young Audiences Content Fund (YACF), and supported by a collective of industry partners; Channel 5’s Milkshake!, CITV, E4, S4C and TG4 are supporting as broadcaster partners, each airing a number of the mini-TV shows per their relevant age category below, whilst Animation UK, BAFTA Kids, The Children’s Media Conference, Into Film, FYI News, Pact and Northern Ireland Screen are also backing the challenge.

The 30 second submissions will be judged by a panel of industry experts from each of the partner organisations, who will shortlist entries in three different age categories; age 4-7; age 8-13 and age 14-18. Judges from the broadcaster partners will then each pick three winning entries from the age category best suited to their target audience, and these entrants will be offered digital masterclasses with an experienced figure from the television industry, who will help each finalist turn their idea into reality. The resulting two-minute mini-TV show will then be aired by one of the partner Public Service Broadcasters later this year.

Dr Ranj said: “We know that screen time, if used creatively and considerately, can be a huge asset in helping children and young people explore and learn about the world around them.  Not only can it be an invaluable educational asset, it can give them an outlet to express themselves in new and exciting ways, and also support one another.  This is hugely important during current times when much of the media is focused on alarming topics and things outside their control. Harnessing the media and reminding them that it can also be a great force for good can do wonders for their mental wellbeing too. I’m so excited to host this challenge and I cannot wait to see what ideas are sent in.”

Jackie Edwards, Head of the BFI Young Audiences Content Fund said: “The pandemic has exquisitely highlighted the importance of Public Service Broadcasting in all of our lives.  This is particularly true for children and young people for whom culturally relevant programming, and seeing people like them on screen, can provide a much-needed touchstone which isn’t always readily available. We’re inviting all young audiences in the UK and Ireland to come up with programme ideas for lockdown life, not just as a creative challenge to entertain, but to help describe and document these very unusual times.  We are delighted to have so many partners involved who are creators, supporters and broadcasters of great quality television for the young of this country. It’s brilliant to get everyone together – while we’re all apart – for the See Yourself on Screen Challenge!”

Minister for Media and Data John Whittingdale said: “This is a fantastic opportunity for young people to use the extra time they are spending at home to get creative and potentially see their ideas brought to life on national TV.

“Through the publicly-funded Young Audiences Content Fund we are aiming to inspire and engage the next generation of TV talent and make sure the diverse experiences of young people across the country are represented on screen.”

In line with the aims of the YACF, the See Yourself on Screen Challenge seeks to encourage children and young people to engage with television, offering them an opportunity to share their ideas and experiences of life amidst the Covid-19 pandemic. Thanks to Government funding, the YACF supports high quality television which reflects the lives of children and young people in the UK and Ireland, and screens on free-to-air, Public Service Broadcasting channels.

The Covid-19 pandemic has forced schools, businesses and other parts of society to shut down. As such, there are millions of children and young people at home in the UK and Ireland, and free-to-access, regulated and safe television content is one of the most important tools at their disposal, be that to entertain, inform – or both.

Meanwhile, recent research[1] shows that only half of children in the UK and Ireland aged 8-15 feel that there were enough TV programmes showing people who looked like them, and children in the nations were especially likely to feel that there were not enough people like them on television[2]. Increasingly, young people are turning to unregulated content, such as online influencers, who share similar interests and experiences but often provide less of a safe space for audiences[3].

[1] Ofcom Children and parents: media use and attitudes report 2019

[2] Ofcom Children and parents: media use and attitudes report 2019

[3] Ofcom Children and parents: media use and attitudes report 2019

The See Yourself on Screen Challenge is addressing this gap by encouraging young people to submit original and creative ideas for UK and Ireland television content, putting the power in their hands to present ideas for TV shows that truly represent their own voices and stories. Entrants are asked to submit an initial 30-second video, summarising their idea for a two-minute long mini-TV show that reflects their own personal experience of the global health emergency and life ‘staying at home’ amidst the lockdown.

The See Yourself on Screen Challenge judges include:

Entries for the See Yourself on Screen Challenge should be submitted via www.bfi.org.uk/seeyourselfonscreen. The closing date for entries is 12 noon on 25th May 2020 and successful shortlisted entrants will be notified by Friday 12th June 2020.

Managed by the BFI, the Young Audiences Content Fund (YACF) supports the creation of distinctive, high-quality content for audiences up to the age of 18. Up to £57 million over a three year pilot, will support the creation of distinct, high-quality content for children and young audiences to be broadcast on free-to-access, Ofcom regulated television channels and online platforms.

Financed by UK Government as part of the Department of Digital, Culture, Media and Sport’s Contestable Fund, the YACF aims to provide new avenues for creators of original content and bring new voices to the market, and back content which entertains, informs and reflects the experiences of young people growing up across the UK today. www.bfi.org.uk/yacf

The BFI is the UK’s lead organisation for film, television and the moving image. It is a cultural charity that:

Founded in 1933, the BFI is a registered charity governed by Royal Charter. The BFI Board of Governors is chaired by Josh Berger CBE.

Dr Ranj is a TV personality with a difference: a flourishing NHS clinician, specialising in the wellbeing of young people; and an exciting on-screen talent who can turn his hand to any subject.

With an impressive TV career already under his belt, Ranj is certainly someone you will be seeing a lot more of in the future. He is one of the resident doctors on ITV’s leading daytime series This Morning, co-presenter of ITV’s prime-time series Save Money: Good Health & Save Money: Lose Weight and co-creating host of BAFTA award-winning CBeebies series, Get Well Soon. As well as these flagship shows, Ranj can regularly be seen on other programmes as wide-ranging as: BBC’s Pointless Celebrities, Inside Out, Celebrity Eggheads and Watchdog; ITV’s Good Morning Britain and Tonight; Channel 5’s Big Brother’s Bit On The Side and 5 News.

In 2018 Ranj swapped his scrubs for sequins as a Strictly Come Dancing contestant, partnered with Janette Manrara. The dancing duo also took part in the Strictly Live Tour in 2019.

In 2020 Ranj fronted a brand new ITV series – Dr Ranj: On Call – a weekly magazine show going back to his roots as a medical professional, aiming to galvanise the British nation into taking control of its physical and mental health.

Off air, his work can be found in numerous magazines and websites where he gives expert opinion and advice on a range of physical and mental health matters. Ranj has regular columns in Attitude, Now and Family Traveller magazines, as well as being an online health correspondent for NetDoctor. He has published two children’s school books with Oxford University Press, which are distributed internationally with more in the pipeline. As a passionate charity ambassador and a sought-after host of live events and panel discussions, his warmth and enviable dedication make him a valuable voice in this space.

Ranj’s training and experience make him well-qualified to cover a broad range of medical topics and science headlines. Furthermore, being the only TV doctor who specialises in children, young people and families gives Ranj the leading edge in this field.

His expertise makes him the perfect medical spokesperson, and his broader passions and hobbies enable him to give a unique and distinctive insight into any subject. Ranj’s charisma and style have made him a household name amongst children and adults, and his impressive social media following highlights his widespread outreach and appeal.